Set in one of Sicily's prettiest towns, Taormina, The Belmond Grand Hotel was the first hotel built in the city, dating back to 1873. Set among a picturesque parkland filled with olives and cyprus trees, richly decorated rooms overlook the sea and the phenomenal Mount Etna. Breathtaking views are complemented with beautiful decor that recreates the splendour of the bygone era, with lush fabrics, parquet floors and ornate windows.

Once the holiday destination of European aristocracy and esteemed names like Oscar Wilde and Truman Capote, this five star beauty is unrivalled in its elegance. Equipped with a relaxing pool, Sicilian style spa and scenic restaurants serving mouth watering dishes, The Belmond Grand Timeo is one like no other. Purple skies and volcano views, private terraces and an exquisite Mediterranean cuisine place the hotel unwaveringly high in the list of luxurious properties in Italy.

Hotel child prices apply to 2–11 years. The hotel has 71 rooms and suites.

A remarkable culinary journey awaits at the most charming restaurant in Taormina. A delectable menu of Sicilian favourites are served in a beautiful terrace where you can enjoy views of Mount Etna and the peaceful Naxos Bay. Locally sourced dishes are accompanied by an expertly selected list of wines from the region for a complete and elegant dining experience.

Gentlemen are required to wear long trousers during the evening.

Enjoy this intimate restaurant, seating just 16 diners, that conjures up the ambience of a noble Sicilian family home. Sit at a table set with baroque-inspired silver cutlery and locally handcrafted table linen and absorb the majestic views. Executive Chef, Roberto Toro, has created a menu that tells the story of his Sicily, including his signature dish Otto di Mare.

Underneath the shade of a pergola, a fresh and seasonal lunch menu is served at the Pool Restaurant and Bar, offering brick-oven pizzas, freshly grilled fish and a salad buffet. With panoramic views over Mount Etna and the Mediterranean Sea, this location is perfect for a poolside break.

With a phenomenal view towards Calabria, The Literary Terrace & Bar has rightfully earned its reputation as a truly seductive location. With unsurpassed views of Mount Etna and the stunning coastline, The Literary was once host to famed artists and serves classic cocktails, including the much loved Etna Spritz.


The outdoor heated swimming pool is surrounded by terraced gardens and a pool bar to stay refreshed throughout the day.

Handmade Sicilian soaps and volcanic olive oil are just two of many spa sensations on offer at The Belmond’s in house spa. Indulge in a variety of Mediterranean special treatments, expertly designed to refresh and nourish.

The hotel has a fully equipped fitness centre, suitable for cardio and weight training.


The Smile Club is located at the sister hotel, 5km away, it is easily accessible via the free shuttle bus. The kids club provides a range of fun activities to keep children entertained.


A shuttle service is available to Belmond Villa Sant'Andrea where guests can use facilities including the beach (charges included, normally in use May to October) and kid's club (opne May to September).

The Belmond Grand Hotel Timeo is set in Taormina, unrivalled as one of the most beautiful spots in Sicily. This beautiful hillside town holds an enviable position, with direct views of the mighty Mount Etna and Nexos Bay. On the east coast, cobbled streets are dotted with designer boutiques and a respected dining scene among historic and medieval churches, centuries old towers and the Greek amphitheatre.

The upper town, Taormina Mare (accessible by a cable car) is quite the contrary, with an array of late night bars, lively restaurants and shops, as well as a shingle beach. Across the Gulf of Naxos is a stunning view of the phenomenal Mount Etna, and although visible from all over Taormina, it’s a prized and uninterrupted view like no other. 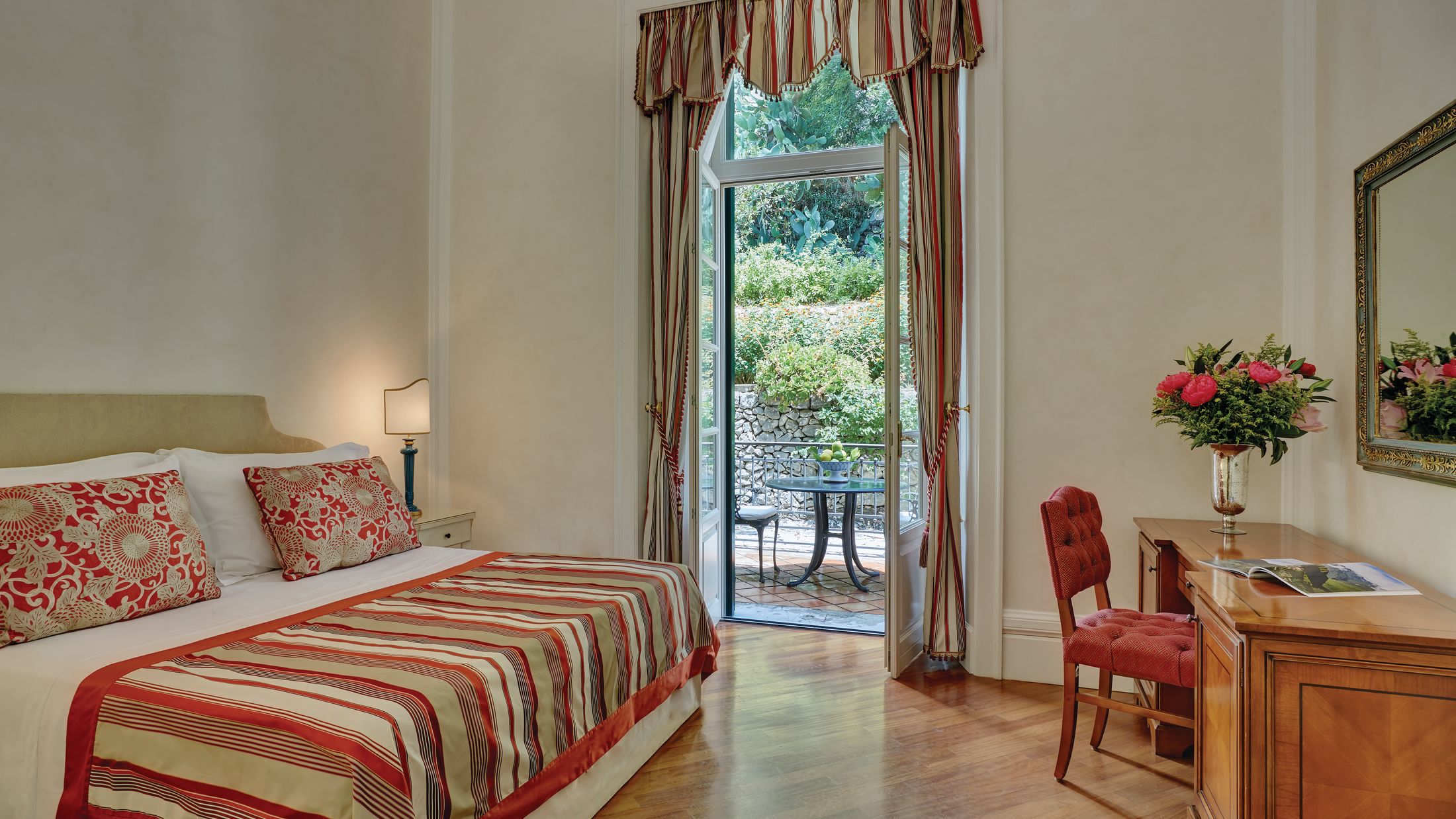 Classic Twin Rooms are elegantly-appointed and aptly located in the Villa Flora annex, just 50 metres away from the main building and built within the delightful country house. 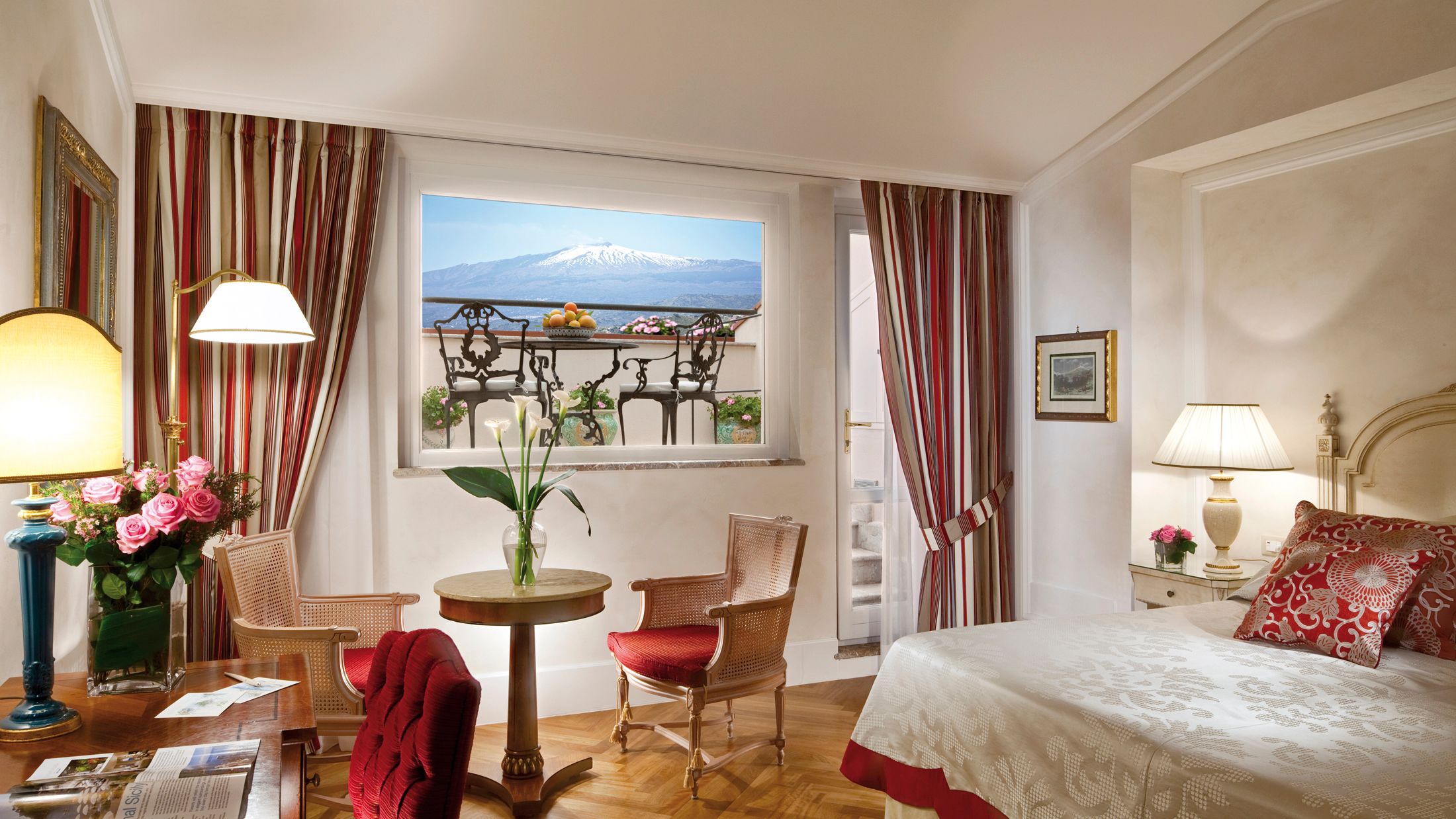 Twin Superior Side Sea View Rooms are located in the Villa Flora and offer a side sea view from the private balcony. 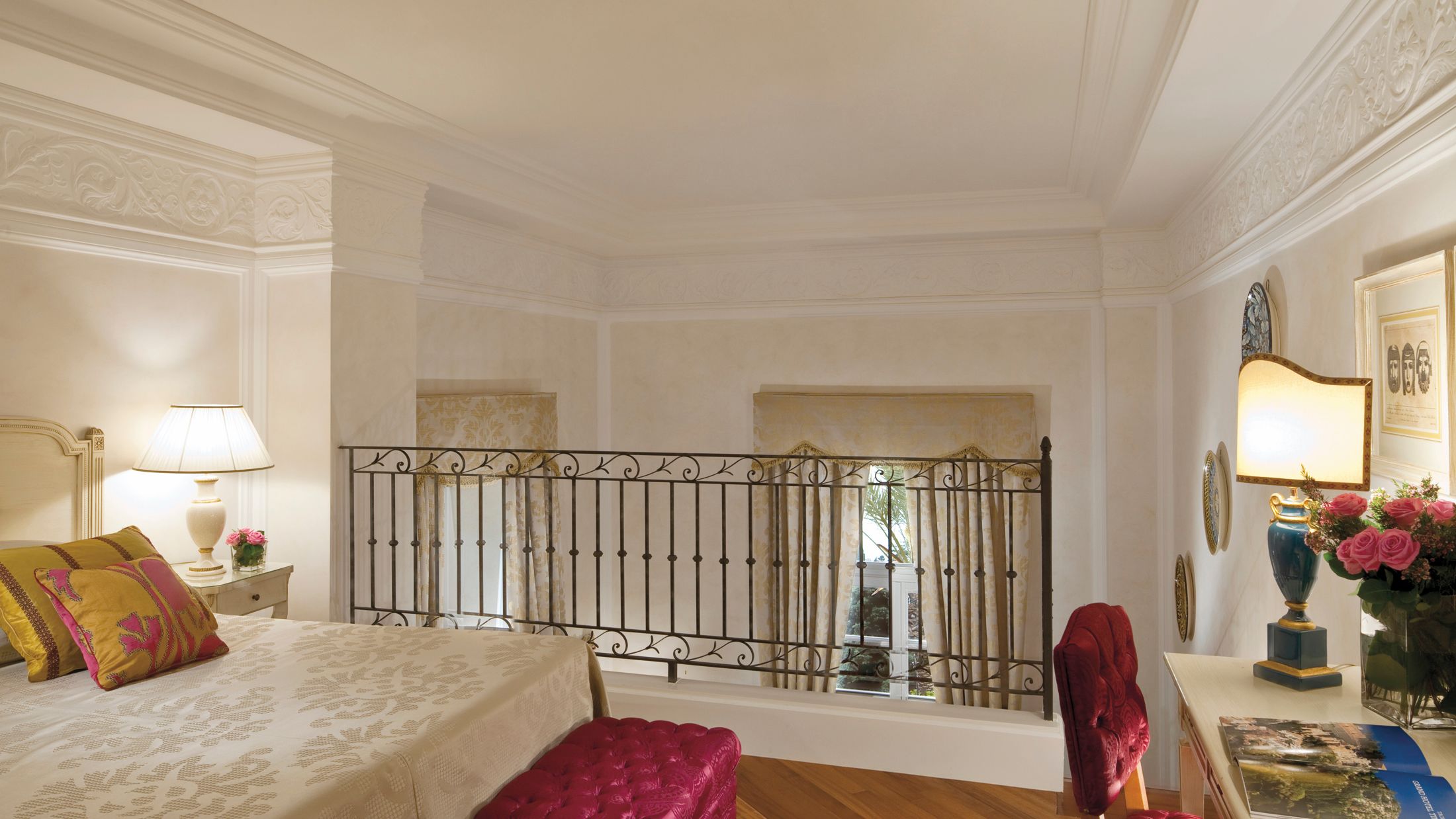 Gallery Rooms are located in Villa Flora and offer direct sea or village views. Rooms span two levels to offer a sitting area on the ground floor with an opulent bedroom on the upper level, with king or twin beds. These rooms feature two bathrooms (one with bath and the other with a shower). 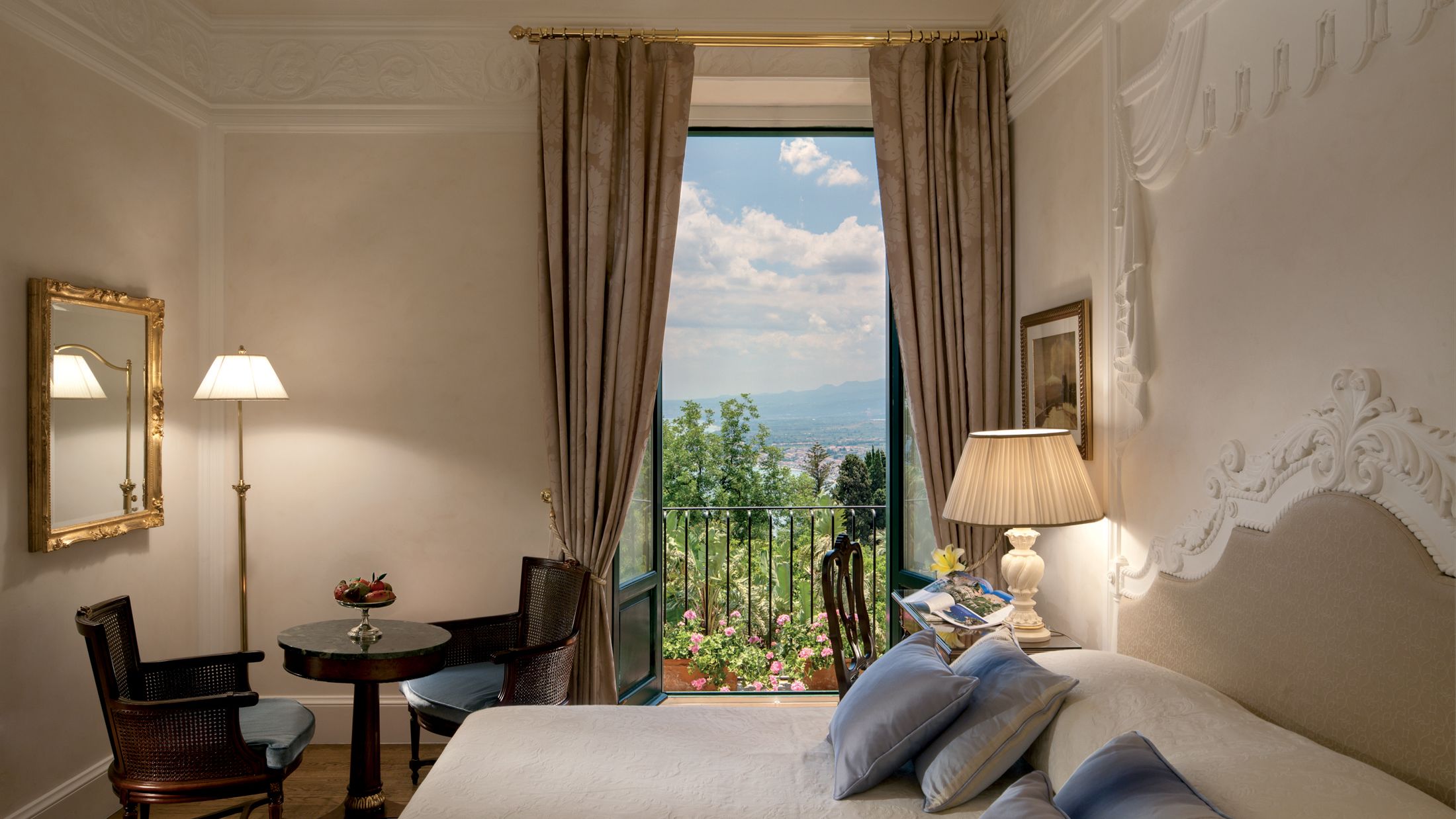 Twin Deluxe Front Sea View Rooms are located in the Timeo building and are luxuriously decorated to reflect a Sicilian style. Rooms offer a panoramic front sea view from the private balcony or terrace. 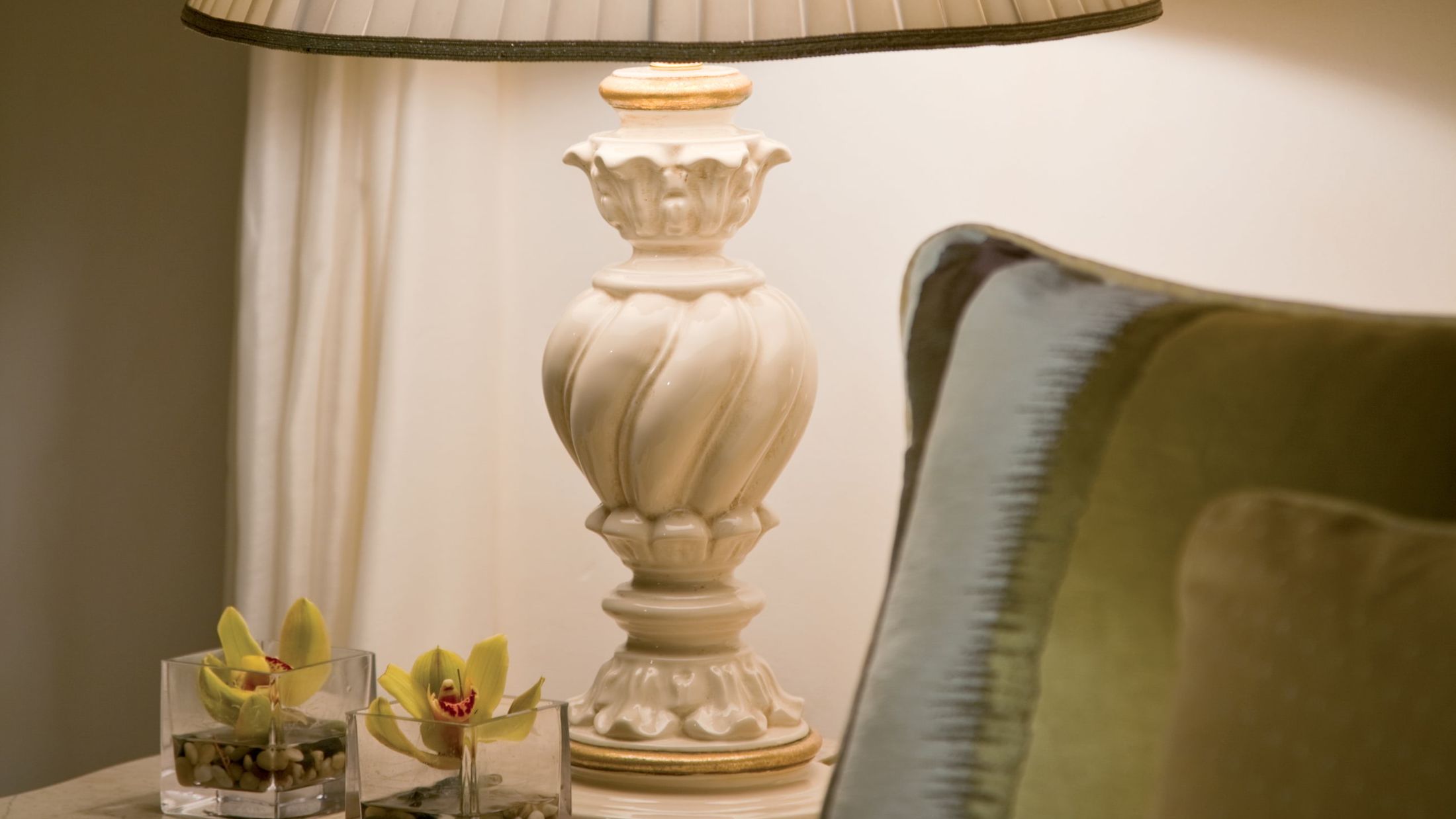 Family Rooms are located in Villa Flora and enjoy a spacious living area and sitting room, a marble bathroom and a bedroom with either king-size or twin beds. 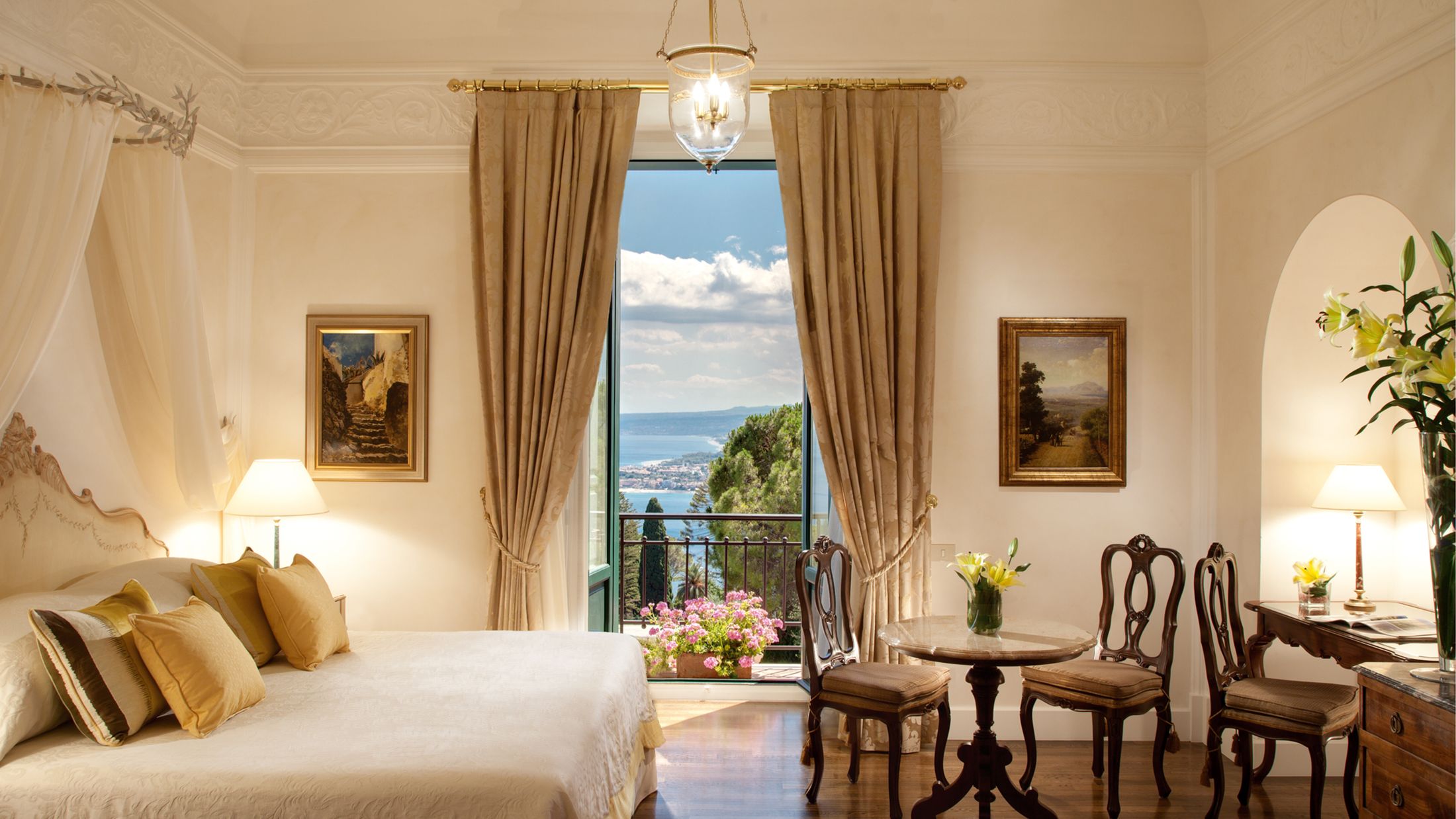 Junior Suite Superior with Front Sea View and Balcony are decorated in a sumptuous Sicilian baroque style, with a prime location within the Timeo Building. Each has a spacious living area and sea views, with glimpses of Mount Etna from their spacious balconies. 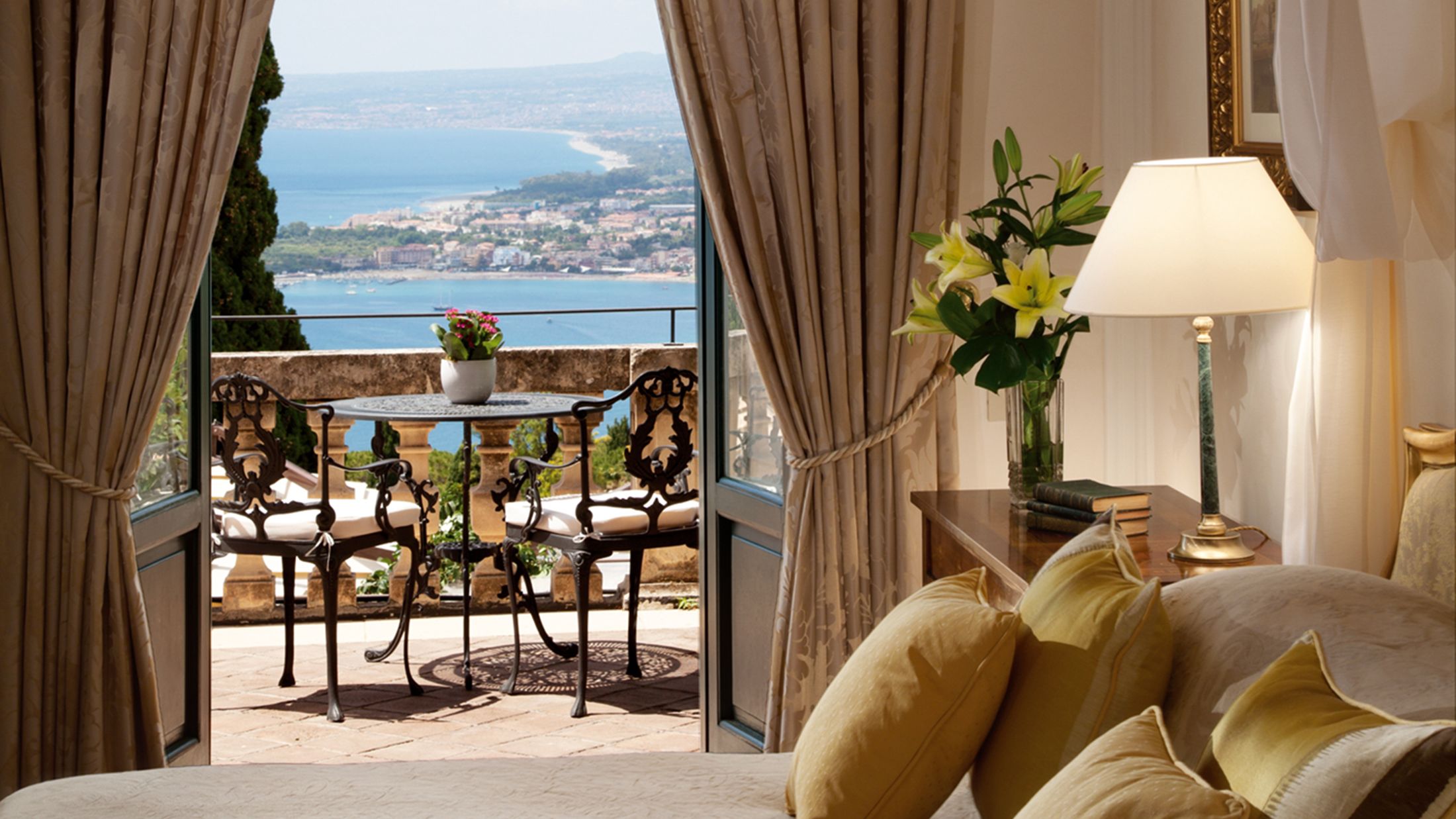 Junior Suite Deluxe with Front Sea View and Terrace are located in the main building and enjoy full panoramic sea views, where breakfast can be served for a luxurious start to the day. 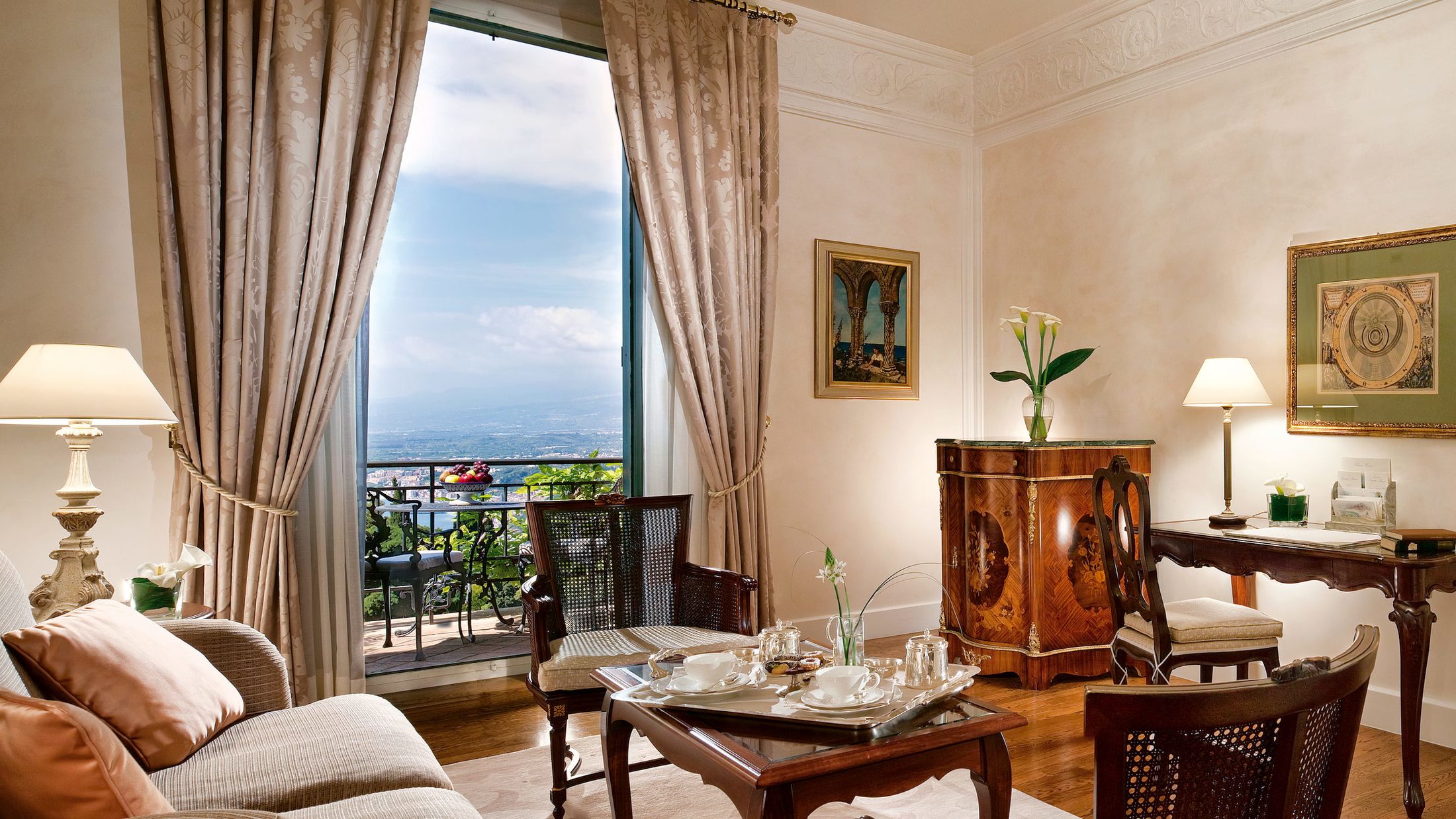 Based on 1376 traveller reviews

20
What to expect
Location

We've been finding people their own slice of paradise for 50 years, and like to think we're pretty good at it.  Don't just take our word for it, though - see what our customers have said about their Sovereign experience.. Read guests reviews...